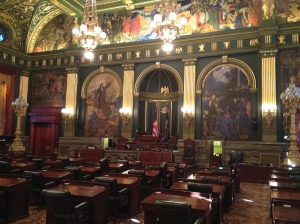 Some of my stories have had political elements, but until now only one (“Mess With Me”) has been set in the Pennsylvania State Capitol, where I work. I’m pleased that my second Capitol-based story was published this morning.

“Oh Well” — published by the fine folks at Out of the Gutter Online’s Flash Fiction Offensive — has scenes set in the Capitol Rotunda, the Senate chamber, and a Senator’s office. The Capitol’s a remarkable building, and if you ever get a chance to visit, I highly recommend it.

“Oh Well” being published is great on its own (I’m thrilled to be back at TFFO!), but also because it gives me an excuse to post a few photos of the spectacular Pennsylvania Capitol (click on any of the photos on this page to see larger versions), including: 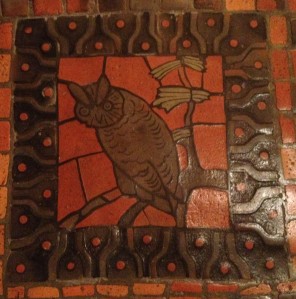 Several of the characters in “Oh Well” share names — and little, if anything, else — with people I know (all with their permission, for any lawyers reading):

Harry’s last name did appear in multiple versions of “Oh Well” — just not the final version. I originally wrote this story in third person, but it never felt exactly right. I think it’s much stronger with a first-person perspective. I hope you enjoy it!

Like many of my previous stories, “Oh Well” shares its title with a song by one of my favorite bands, The Throes.

Don't miss anything! Sign up for my email newsletter.